"New York City in Transformation," edited by LinDa Saphan and Jennifer M. Pipitone, profiles urban transformations in New York City, broadly defined and ranging from mundane daily rhythms of the city to the extraordinary. Together, nine academic and artistic selections highlight the myriad ways in which urban transformations can take place: at varying scales and speeds; at varying levels of visibility; and at the hands of different stakeholders, actors, and agents of change. 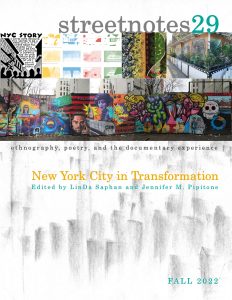 A movie premiere style book launch for the first book on Cambodian early Cinema. The DMC team did a fantastic job at organizing a beautiful events at the Prime Cineplex Samai Square in Phnom Penh. A grandiose book launch attended by the movie industry people.

There was a need to document the contribution of early Cambodian cinema and its recent revival as an art form from Cambodians in the homeland and in the diaspora. Hence Dr. LinDa Saphan recent work focuses on Cambodia’s visual and popular culture of the early years of Cambodian cinema Faded Reels: The Art of Four Cambodian Filmmakers 1960-1975 will be published in July 2022 in English and in Khmer by the Royal University of Phnom Penh, department of Media and Communication. The book covers the early history of Cambodian cinema and focuses on four directors: Ly Bun Yim, Tea Lim Koun, Yvon Hem, and Uong Citta (aka Kanthouk).

Dreams for Our Children: Immigrant Letters to the Future

Dream for Our Children: Immigrant Letters to the Future.

LinDa Saphan contributed a piece "What's in a Name?" The story behind the meaning of her name and her personal journey to reclaim my cultural heritage and identity through a letter written to her 10 year old daughter.

This book project was created during the lockdown and it is quite an uplifting project from immigrants sharing their experiences and stories.

The book can be purchased at Barnes and Nobles

Dr LinDa Saphan from the sociology department will be hosting a webinar organized by The Center for Khmer Studies (CKS), The New York Southeast Asia Network (NYSEAN), and The Nordic Institute of Asian Studies (NIAS) on Cambodian prewar musical influences.

Wonder how House of the Rising Sun by The Animals sounds in Khmer? Curious how surf guitar and Ennio Morricone played a part of Cambodian musical heyday? Tune in on January 28 at 8am eastern time by registering on the link below: