The time has come to finish our documentary film: Don’t Think I’ve Forgotten: Cambodia’s Lost Rock And Roll. Our goal is to finish the film this fall. Because so much visual material was destroyed by the Khmer Rouge we are working extra hard in creating ways to illustrate this incredible music.

The singer Ros Serey Sothea began as a poor farm girl from the countryside. Because of her amazing voice she soon found herself to be the biggest female singing star in the country. Unfortunately she didn’t survive the Khmer Rouge era. No footage of her performing is known to have survived either. We would like to make an animated sequence of Ros Serey Sothea performing. It would help bring her back to life on screen.

In order to meet this goal we need your support.  We are excited to announce an online fundraiser via Kickstarter.com. 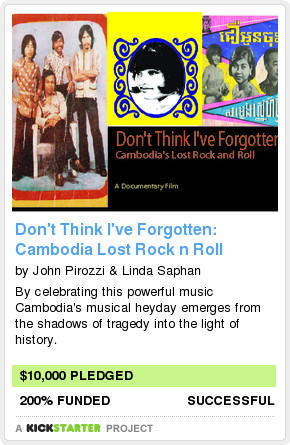